If I’ve been a bit quiet on the blog lately, it’s because I’ve been occupied with finishing the first academic experience of the semester. Because Oxford operates on a system of eight week trimesters beginning in October, American study abroad programs must improvise to compensate for the mismatch in credit load. My program — the Centre for Medieval and Renaissance Studies — solves this issue by scheduling an ‘integral’ course during the September of pre-term. After a week of lectures back in the beginning of September, we’ve been free to select our own research topics, bound only by the confines of European geography, 400-1750. That course ended last Thursday with the submission of our research essays and since then we’ve enjoyed a long weekend break of sorts. A number of our program have scattered across the continent — some to France, others to Ireland, and a few to Berlin. Bekah and I stayed on Great Britain, but did find time on Sunday to travel to London to take in a show. While I’ll be blogging about this weekend soon, there are several experiences I want to share first (even if that desire revolves mostly around my need to share pictures…).

Back in late September (the 25th), CMRS took its last collective field trip to Hampton Court Palace, located in southwest London on the Thames. (If one pictures the City as the center of a clock face defined by the M25 motorway, Hampton Court is located off the tip of the hour hand at eight o’clock.) Hampton Court was built by Cardinal Wolsey in 1515, and, like Christ Church, was repossessed by Henry VIII upon Wolsey’s fall from favor in 1529. (Wolsey, if you remember, played a prominent role in another institution I’ve blogged about before.)

Henry set about renovating the palace in order to host his court of over 1,000 people. While the exact architectural timeline of the palace is too complex to rehash here, perhaps the most iconic Henrician addition was the Great Hall. The Tudor years at Hampton saw a number of storied events. Most of Henry VIII’s ill-fated marriages took place at Hampton Court, the future Edward VI was born in the palace, and Jane Seymour’s heart is buried there. After Edward’s early death, Mary used the palace for her honeymoon; Elizabeth in turn occupied the buildings during her reign.

Stewart followed Tudor when James VI of Scotland became James I of England, but the English monarchs continued to use Hampton Court. It was there, in 1604, that the King met with a Puritan delegation and agreed to commission the King James Bible (subsequently released in 1611). James’ son Charles I was imprisoned in the palace before his execution and after the English Civil War and the monarchal restoration, Charles II returned to Hampton Court (although he preferred to live elsewhere).

Looking south across the Georgian facade

When William and Mary ascended the throne as a result of the Glorious Revolution in 1689, they set about renovating the Tudor palace which, since its founding over a hundred years earlier, had gone out of style. Engaging Christopher Wren as chief architect, the dual monarchs intended to demolish and rebuild the old palace one section at a time. Thankfully, after Mary’s death in 1694, William lost interest in the project, leaving much of the Tudor palace intact. (William, incidentally, sustained the fall which would eventually kill him at Hampton Court. While riding in the grounds, his horse’s hoof caught in a mole hole and threw the king to the ground. Jacobite sympathizers would, for years after, covertly signal their affiliation by offering a toast to “the little gentleman in the black velvet waistcoat.”)

However, as a result of William and Mary’s rebuilding, Hampton Court straddled two vastly different architectural worlds. The front of the palace retained the original Tudor gates, walls, and buildings while the rear was cast in the emerging style of the 18th century, surrounded by sprawling gardens, and characterized by its use of light, colour, and inspiration from classical antecedents. The result is a palace in two halves: the front hearkening back to a Medieval past and the rear looking forward to the long 18th century. The contrast in style is abrupt and stark. After entering the grounds through the Tudor gate, proceeding through the Tudor courtyard and through the Tudor kitchens and cellar rooms, one emerges from a dark corridor into a sunlit Georgian quad. Heavy brick and stonework gives way to fleet columns and glass.

Courtyard fountain which flowed with wine, not water 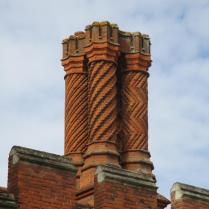 “Where are you from?” “Minnesota.” “Where is that?” “The new world.” “Oh, you must mean the Spanish colonies!” 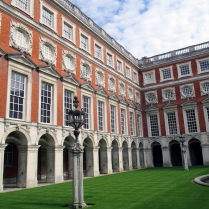 Upon the Hanoverian succession which brought the grandfather of colonial America’s royal nemesis to the throne in 1714, the palace was occupied by George I and II in turn. George II in particular continued the renovations, expanding the refurnishing many of the interior rooms. But beginning with George III (the King of the American Revolution), no English monarch has lived in the palace. By mid-century, Hampton Court was turned over to the charity Historic Royal Palaces by whom it is operated today.

The Tudor portions of the palace are dark and musty. The air is heavy and smells of old fires and roasted food — not an unpleasant smell. In contrast, the later portions of the palace lose this air entirely. After passing through the quad, one emerges into the rear gardens surrounding the palace. These gardens, modeled after an 18th century pattern, are extensive, sprawling across the entire length of the palace and many times its depth.

Looking west toward the palace in the Great Fountain garden 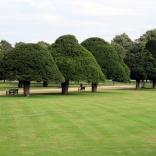 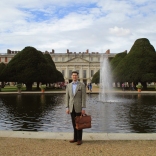 Looking east toward the Jubilee Fountain 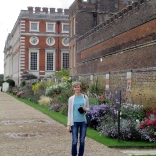 Looking north, with the Georgian facade in the distance 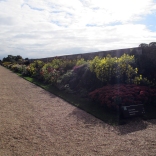 Looking south along the east side of the Privy Garden walls 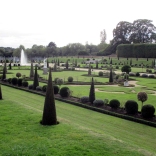 Looking southwest across the Privy Gardens

Looking north toward the Georgian facade 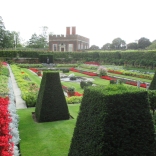 In front of the westernmost Pond Garden

The Great Hall was build by Henry VIII to entertain his court. As a young man, Henry had a reputation for great festive endurance; for good reason. One of the exhibits listed the food and drink consumed by the court annually:

It’s no wonder that the average courtier consumed between 4,500 and 5,000 calories per day! 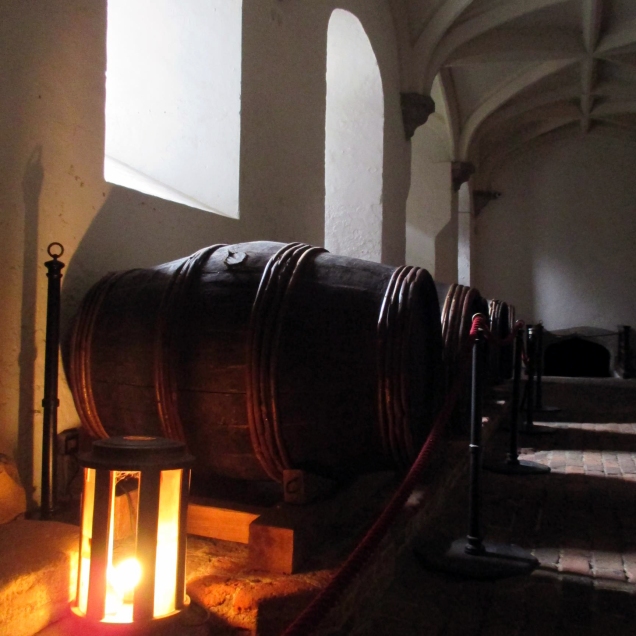 In the great hall

In the great hall

Servants dining room. Everything in the room is 16th century 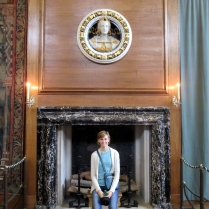 A room off of the Great Hall

The chapel at Hampton Court was built by Cardinal Wolsey. Later, Edward VI was baptized there; Henry was married (several times) there; and Jane Seymour’s heart lies beneath the altar. The ceiling is original, a stunning example of Henrician architecture. The English royal motto, “Dieu et Mon Droit” is emblazoned across the ceiling dozens of times. The translation — “God and My Right” — is as bold an assertion of royal prerogative as can be found. Under William’s rule, the chapel was renovated, during which time the wooden altar screen (designed by Christopher Wren) was installed. Photographs are prohibited; I’ve pulled several together from various websites (plus one I snuck). The official webpage for the chapel is also worth a browse. 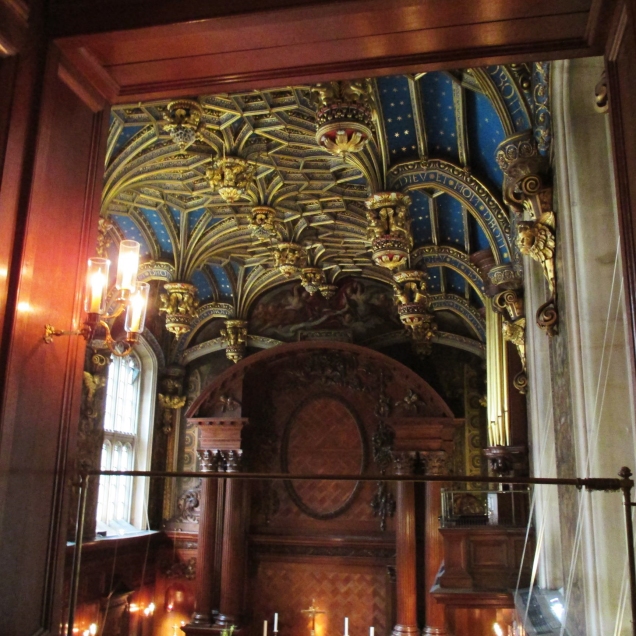 One of my two clandestine photos of the chapel 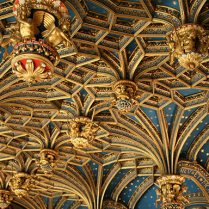 Towards the end of the trip, we explored the apartments of William of Orange. Among the last additions to the palace, the apartments offer a glimpse of late 17th and early 18th century life as a British monarch. The influence of the contemporary Palace of Versailles is evident, as much of what William hoped to accomplish with the renovations was in imitation of his French counterpart. 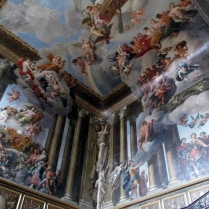 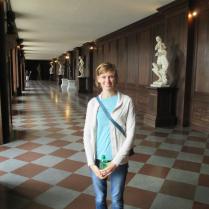 Georgian portion of the palace 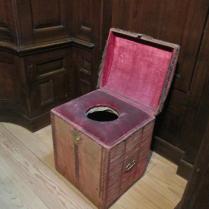 A throne fit for a king

This is carved wood, a design which runs nearly fifty feet in length around the fireplace 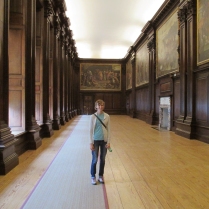 In the Georgian apartments

In spite of the splendor of the palace and its gardens, I think the thing which has stayed with me (and Bekah) most is the smell of the Tudor rooms and corridors. I’ll let her describe it:

…an earthy, dark, meaty, smell. Like feasting with King Arthur. 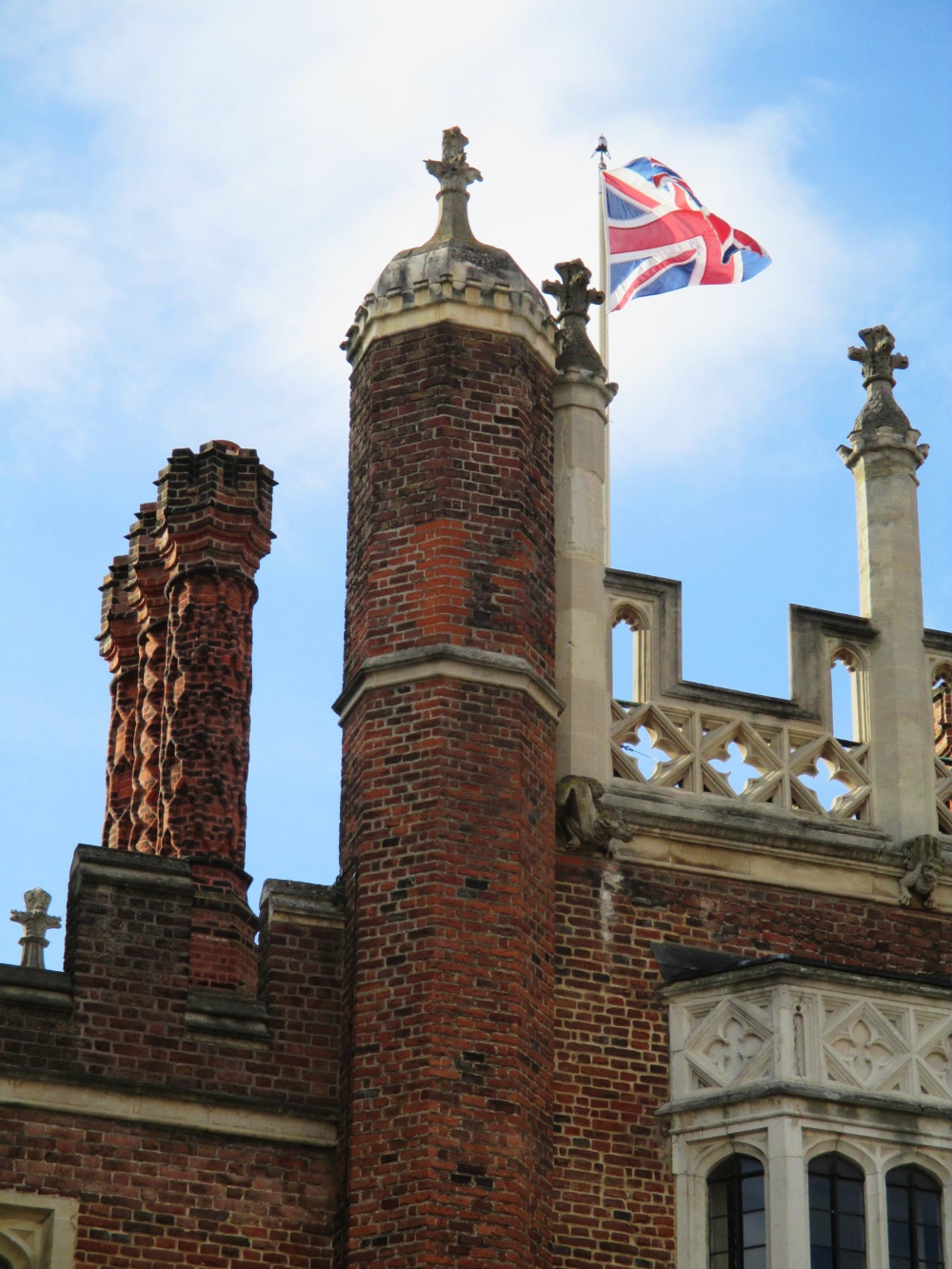 ← Port Meadow and Environs
School and Other Things →