Bethel at War, 1914-2014: A Digital History of a Christian College in a Century of Warfare 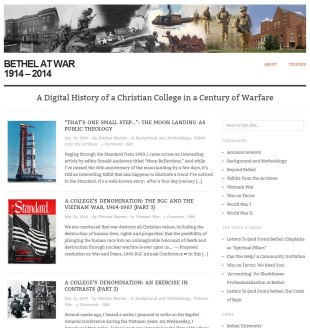 As a co-recipient of a 2014 John Alexis Edgren Grant, I am currently collaborating with the head my my department, Dr. Christopher Gehrz, to create a digital exhibit presenting an impressionistic survey of the impact of 20th century total war on Bethel University’s development. Occasioned by the twin centenaries of the Great War and the relocation and merger of what was then the Swedish Baptist Theological Seminary with Bethel Academy in St. Paul, Minnesota, the project spans four major wars of the past century — both World Wars, the Vietnam War, and the War on Terror — and seeks to address three central questions for each time period:

While Dr. Gehrz is addressing the two World Wars, I am focusing on the Vietnam and War on Terror eras. Each war will be addressed through a series of interpretive essays covering important themes and issues. Throughout the summer, we have been blogging through our research, highlighting interesting archival finds, and covering significant — if somewhat tangential — topics.

We plan to launch the full exhibit mid-fall and will present our research in February.

“‘A Long Way from Minneapolis:’ Minnesotans in the Abraham Lincoln Brigade”

While the above title refers to my baccalaureate history thesis, it is also the title of a much-expanded treatment on which I am presently working. The following is the abstract for that expanded work, of which chapter three is currently complete and chapter six is in progress:

“This work examines for the first time the sixty Minnesotan men who volunteered to fight in the International Brigades of the Spanish Civil War, as well as those men and women who supported their efforts at home. Centered around the lives and experience of three men — George Zlatovski, Benjamin Gardner, and Clarence Forester — the work takes particular care to examine the slew of contexts — familial, ethnic, immigrant, social, temperamental, and political — that shaped the men and contributed to their decision to fight in Spain, carefully reading the Minnesota experience against the established literature on the broader American experience. Chapter One introduces the significance of the Spanish Civil War in general and of the Abraham Lincoln Brigade in particular, using one Minnesotan’s participation in the 1996 Brigade commemoration in Spain as a framing device. Chapter Two examines demographic aspects of the Minnesota volunteers, taking care to identify commonalities and contrasts. The chapter further introduces the early biographies of each of the three central figures. Chapter Three then outlines the Depression-era political context by which all of the men were affected and traces the tactical shifts of the Comintern and CPUSA of the late 1920s and 1930s. The chapter suggests that a broadly-shared idealism among the volunteers accounts for their commitment to Communism and defines two groups of future-Lincolns: those who joined the Party during the Third Period and those who were attracted more by the broad, internationalist approach of the Popular Front. Chapter Four advances the central trio to Spain, noting the dissimilar methods by which Minnesota volunteers gained access to the country, as well as chronicling the domestic political response to the war, particularly the diplomatic and legislative efforts of the U.S. Congress and president Roosevelt. Chapter Five sketches the larger outlines of the XV International Brigade in Spain and continues the biography of the central trio, focusing particularly on their experiences of modern war and on the political nature of life in the Brigades. Of particular concern are the reactions of the men to the reality of Spain, both those of continued faith in the cause and those of disillusionment. Chapter Six continues the theme of domestic political support for the Republican cause, focusing on the activities of Congressman John T. Bernard at home and in Spain. Chapter Seven chronicles the experiences of a select group of Minnesota Lincolns — those who were captured by Nationalist forces and endured the prison camps, in some cases, up to a year after the war had ended. Chapter Eight brings the men back to America and traces their varied experiences after the war, from service in Germany during WWII to continued FBI harassment through the McCarthy years and beyond (abstract from author).”

“‘A Long Way from Minneapolis:’ Minnesotans in the Abraham Lincoln Brigade”

Baccalaureate history thesis on the ways in which Minnesotan International Brigaders experienced the Spanish Civil War. In particular, the paper focuses on ethno-political motivations for volunteering.

“This paper explores the Spanish Civil War (1936-1939) in the context of international Great Power diplomatic concerns. Focusing specifically on the ways that Britain, France, Italy, Germany, and the Soviet Union (as well as their private citizens) intervened and did not intervene in the war, the paper argues that the conflict provided a pivot around which their alternately conflicting and consonant diplomatic goals could turn. While the Second World War might still have been avoided in 1936 at the beginning of the Spanish Civil War, the endgame set in part by the diplomatic and policy responses of the Great Powers would make 1939’s swift tumble into ruin increasingly inevitable (abstract from author).”

“Islamism, Antisemitism, and the Jewish Question in Palestine”

“This paper seeks to characterize modern antisemitic impulses in Islamism as 19th century European intellectual imports. These foreign ideas were grafted onto the emerging conception of Islamism as a pietistic reaction to modernism and the collapse of Ottoman civilizational strength. Thus, although Islam has long had a difficult relationship with Jews, the forms of antisemitism which presently inhabit Palestinian discourse are fundamentally a-historical and indeed represent a western colonization of the Islamic mind (abstract from author).”

“This paper argues that in contrast to the standard ‘short’ Cold War periodization (1945-1991), the Vatican waged a ‘long’ Cold War against the Soviet Union beginning in 1921. This deep history of antagonism vis-a-vis communism led the Vatican to pursue a dangerous and byzantine course during both WWII and the immediate postwar period. In both periods, Pius XII’s overriding fear of communist expansionism led him into controversial stances: during the war, a naive characterization of Nazism, and in the emerging Cold War, a hawkishness which isolated him from the dominant American conception of containment (abstract from author).”